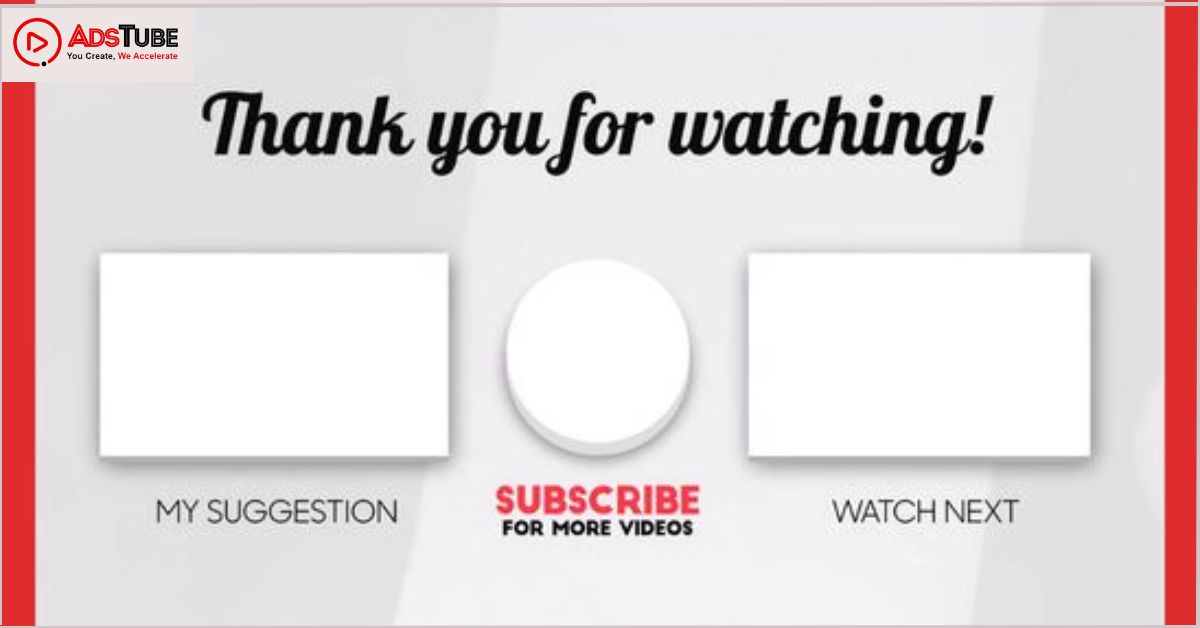 A YouTube end screen is a feature that allows creators to add interactive elements to the last 5-20 seconds of their video.

Posted By : Sarah Category : YouTube Knowledge Date : 09 January 2023 5 minutes read Share
A YouTube end screen is a feature that allows creators to add interactive elements to the last 5-20 seconds of their video. These elements can include links to other videos, playlists, or channels on YouTube, as well as links to external websites or social media profiles. End screens can also include calls to action, such as subscribing to the creator's channel or encouraging viewers to watch more videos.
The purpose of an end screen is to keep viewers engaged and encourage them to take further action, whether that be watching more of the creator's content or exploring other related content on YouTube. End screens can be created and customized through the YouTube Studio platform, and can be added to any video that is at least 25 seconds long.

What can I include in my YouTube end screen?

There is no specific length requirement for YouTube end screens, as they are meant to be a visual element at the end of your video. However, it is generally recommended to keep them short and concise, as viewers may lose interest in a long end screen. Ideally, your end screen should be between 15-30 seconds long and contain a clear call to action for your viewers. This could include asking them to subscribe to your channel, watch another related video, or visit your website. It is also important to include a thumbnail and title for each video or link you include on your end screen, to make it easy for viewers to understand what they are clicking on. Overall, the key is to create an end screen that effectively promotes your content and encourages viewers to engage with your channel further.

Can I customize the appearance of my YouTube end screen?

Can I use a YouTube end screen on all of my videos?

Yes, you can use a YouTube end screen on all of your videos. An end screen is a visual element that appears at the end of a video and serves as a way to promote other content or encourage viewers to take a specific action, such as subscribing to your channel or visiting your website.
To add an end screen to your videos, you will need to use the YouTube Studio editor or use a video editing software that allows you to add end screens. Once you have added the end screen to your video, it will appear at the end of the video for all viewers.
There are a few things to keep in mind when using end screens on all of your videos. Firstly, make sure that the end screen is relevant to the content of the video and adds value to the viewer. Secondly, consider using a variety of end screens on different videos to keep things interesting for your audience.
Finally, be mindful of YouTube's guidelines for end screens, which include not using end screens to deceive or mislead viewers, and not using them to promote inappropriate or harmful content. Overall, using an end screen on all of your videos can be a useful tool for promoting your other content and engaging your audience, as long as you use them in a way that is consistent with YouTube's guidelines and adds value to the viewer.

Are there any best practices for using a YouTube end screen?

Here are a few best practices for using a YouTube end screen:
1. Use a clear and eye-catching thumbnail image to grab the viewer's attention.
2. Keep the end screen simple and focused on a few key elements, such as subscribing to your channel or promoting related content.
3. Use the end screen to promote your website or social media accounts to drive traffic to your other online platforms.
4. Make sure to include a call-to-action, such as "click here to subscribe" or "follow us on Instagram," to encourage viewer engagement.
5. Use the end screen to showcase your other videos or playlists, so viewers have a reason to stick around and watch more of your content.
6. Test different end-screen layouts and elements to see what works best for your channel and audience.

In conclusion, YouTube end screens are a valuable tool for increasing viewer engagement and directing traffic to other content on your channel. By following the guidelines outlined in this guide, you can create effective end screens that drive more views and subscribers for your channel. As always, be sure to stay up-to-date with any changes to YouTube's end screen policies and best practices to ensure your end screens are optimized for success.